Golf... it spoils more than a good walk!

An investigation into how the premiere golfing competition, the Ryder Cup, is coming to Ireland 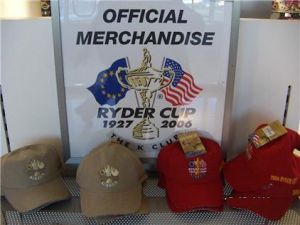 Get your goodies here

The Ryder Cup is an occasion of horror to those who regard golf as a way of spoiling a good walk, or merely, an excuse to wear Rupert the Bear trousers in public. However, this major sporting event is coming to Ireland this September. There has been virtually no background investigation into the preparations. Until now...

In all, the Ryder Cup 2006 at the K Club is a sickening display of wealth, arrogance, and greed. Its one of disregard and disdain for the Irish people, local community, and taxpayers. Mark Twain was right when he said golf spoiled a good walk, but he neglected to mention that it could be a great excuse for increasing the value of private property for a few at the public expense of the many.

The premiere golfing competition, between American and European golfers, will be held at the exclusive K Club. The Ryder Cup website tells us "Irelands magnificent K Club is delighted to take its place amongst the venues on this prestigious list (of places that have hosted the competition)". Given the increase in value of the K Clubs property that can be expected as a result of the publicity and the investment in infrastructure close by, Id say theyre ecstatic.

The K Club is a privately owned complex of 550 acres (President: Michael J Smurfit, mega wealthy businessman and Irelands resident honorary consul to Monaco), in County Kildare. Consisting of an upmarket 5-star hotel, health spa, fishing, riding, 2 golf courses, and other leisure facilities for the wealthy and privileged, its also a location for exclusive private residencies owned by the great and good, safely ensconced as a gated community.

Firstly, the location has triggered a major investment in local infrastructure. Anyone used to driving the dismal approach roads in the vicinity of the K Club must have thought that public representatives have finally woken up to the needs to the local community. Far from it. The spending of public money on a major road-building programme in the area is driven by the requirements for the event at the prestigious, elitist estate. Improving the infrastructure for an even that that lasts a few days results in what economists call externalities - an increase in value for K Club properties, and increased flow of customers, and hence more profit.

We need those roads built quick for those important Irish, Japanese, European, and American capitalist bosses and politicians (George Bush Senior and Bill Clinton, who himself was once thought to own a property on the grounds, are rumoured to be attending) as they ride their limos down to the K Club. And, sure, it keeps Polish road workers busy around the clock, busting a gut to finish on time. But, lets be clear, the people of Kildare are not foremost in the minds of the decision-makers and project managers.

Secondly, the golf itself will be closed to viewing by the general public and other gawkers. Tickets are already changing hands for thousands of euros, dollars, and pounds on eBay (see picture). Tales of local families renting out their homes to news organisations and to golf fans for 35,000 a week have hype a sick cash-nexus surrounding the event. The ordinary Irish Sunday golfer and family are therefore unlikely to be able to afford to attend.

Instead it's high prices for the regular punters, while the elite, the wanna-bes, the lumps, frumps, and grumps of post-ceasefire, Celtic Tiger, Riverdance, hot tub-owning Ireland rush to spend their SSIAs cash and exercise more stock options to pay for a chance to rub shoulders with the rich and famous.

Not that all pay according to their means. Its an occasion for corporate freebies for rich businessmen, celebrities and politicians, lavish sponsorship ligs (sponsors include O2, AIB, Philips, Ballygowan, Chase, et cetera), and a sense of luxurious exclusivity will be guaranteed by private security, secret service men possibly, and a large Gardai presence. Sunday Independent, Hello! And VIP magazine hospitality tent photos all round, but were unlikely to see Father Peter McVerry featuring in them. And forget any thought of a Croke Park residents-style agreement of free tickets for locals. If access to your own home is disrupted for the week, then just be glad that Michael Smurfit and buddies at the K Club are putting Ireland on show for the rest of the world (and for better coverage of K Club properties than theyd get in the Property Supplement of the Irish Times too).

Next, this April, Fianna Fail Minister for Communications, Marine and Natural Resources, Noel Dempsey T.D., decreed that the competition would not be one of the designated "Free-to-Air" transmissions. In considering the proposal to designate the Ryder Cup it was clear to the Government that it met some of the criteria but not all he said. Instead, it's pay per view for Sky Sports subscribers (prop. M Murdoch).

Undoubtedly, some laud any decision that eliminates a major cringe factor in Jimmy McGee or Bill OHerlihy about mangling yet another set of foreign names on RTE. However, golf is a popular participatory sport in this country (more golf courses per capita than anywhere else). The Minister for Sport and Eurovision John Donoghue says that "we have invested more than 250 million in golf alone to help establish Ireland as one of the worlds most popular golfing destinations" (source: www.rydercup2006.ie). So taxpaying punters will pay for the privilege of watching the event they've facilitated and paid for (16 million of Irish taxpayers money in promotion costs alone, according to TD Jimmy Denighan).

Finally, the Ryder Cup 2006 merchandising is truly sickening, but by, the look of it, extremely lucrative. Feeling underdressed? Then pay 85 for your Ralph Lauren Polo shirt with "Ryder Cup 1927-2006 at the K Club logo in Brown Thomas in Grafton Street (see picture). Match it with a similarly styled baseball cap for 35. "The K Club, and other The K Club logos and product and service names are trademarks of The K Club" were told on the K Club website, so Mick and lads are not left out of the proceeds. Other goodies are available about Ireland (as soon as you arrive at Dublin airport, see picture) and of course from the K Club website itself (a must have Ryder Cup holdall is a snip at 120).

In all, the Ryder Cup 2006 at the K Club is a sickening display of wealth, arrogance, and greed. Its one of disregard and disdain for the Irish people, local community, and taxpayers. Mark Twain was right when he said golf spoiled a good walk, but what he forgot, was that it could be a great excuse for increasing the value of private property for a few at the public expense of the many.

What's transpiring at the K Club is a Krying Shame at best, and Kapitalist Kontempt at worst. Well done to RTE and the rest of the mainstream media for not being able to get their heads out of the sand in the bunker again and taking their eye off the birdie again.

Have that unncessary Kidney taken out now - tickets must be had

Just the thing for the Goys to wear to the next fight at Anabels, too

http://www.indymedia.ie/article/76276
Indymedia Ireland is a media collective. We are independent volunteer citizen journalists producing and distributing the authentic voices of the people. Indymedia Ireland is an open news project where anyone can post their own news, comment, videos or photos about Ireland or related matters.