'Why pay Eoghan Harris when spin and opinion is free eh?' sez Wag. 'All power to the commenteers!' 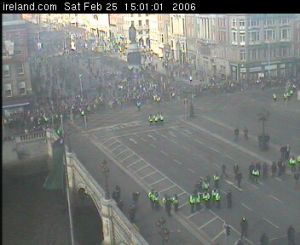 Looking on through the lens of the virtual on Saturday I was stunned by the breath and depth of the live and parasitic (in a healthy way) critique of the action which unfolded alongside the action on O'Connell Street on Indymedia Ireland and throughout the hiberno-blogosphere. I quickly realised that this was definitely the first example of an ad-hoc flashmob of citizen journalists banding together with a decentralised diy publishing infrastructure, spontaneously, as live and with no pre-planning whatsoever and with no notice, flexing its muscles and absolutely wiping the floor with the methods of the traditional media. RTE had just about caught up with events by the time the (10 minutes later than scheduled) late evening bulletin came around. All of the blogs all day were choc full of dissatisfaction with the performance of the 'public service' broadcaster.

Slugger O'Toole from the wee six is hardwired into the blogosphere and their roundups of coverage are as good an entrypoint as any into this emergent phenomenon. Bloggers and citizen journalists threw the kitchen sink at the event: Linking to live radio sources; Grabbing compelling images from traffic cameras; Utilising cheap video cameras and digital cameras and phone cameras; Hopping in and out of net cafes (plenty serving the new immigrant communities on Parnell Street); Doing the Flickr thang.

However for me the defining feature of the citizen journalist coverage that shows its unique power was the absolute breakdown of the ever thinning line between participants in, producers of and consumers of news events. Participants and observers on both sides of the Garda line as well as observers removed from the event but live on the network of networks had their say, debated, analyzed and interacted live as the event and its aftermath unfolded.

Within a period of two days all the materials that a skilled tv-documentary filmaker would in previous years spend weeks working to assemble so as to reconstruct and narrate such an event - the footage, stills and viewpoints from a range of perspectives - were there for the taking on the web and much of it with non-traditional copyright licences attached. It felt like a revolt against the staid usual suspects approach of the newspapers and tv presently available in the Republic of Ireland. It was a cross-border bottom up non-sectarian effort too which in some ways is the healthy obverse of the outright obfuscation, pointscoring, demonisation and agenda pursuing visible in the majority of mainstream coverage. A thirst for something approaching the truth was apparent.

Of course Indymedia Ireland has used the same toolset to cover various events before in Ireland and even abroad but loose co-operation and foreknowledge that an event would take place at a particular time and place was in the past a prerequisite of such coverage. This time the same model was spontaneously adopted by large numbers of people at a moments notice.

The flipside of the coin is that this was also in my opinion - after having read through as much citizen-reporting as my eyes can handle - the first truly spontaneous 'smartmob' protest in Irish history. Yes, of course some actors with various agendas seeded the event - RSF by calling it - casuals from various areas who decided to have a little sport - those with a nose for trouble who simply turned up out of curiosity - but it seems clear that as the confrontation between protesters and the Gardai began, word of trouble and fun and opportunities for revenge and cheap goods spread with the use of text messages and mobile calls through the cheap housing and rough pubs in the north inner city like a raging bushfire. Within minutes those seeking to block O'Connell Street had more reinforcements than even those most up for a riot (or the Gardai) could ever have imagined. The rest, as they say, is a people's history - except for some footage documenting the first baton charge by the Gardai on protesters. I'm sure it'll turn up.

Run - the future is behind you.