Shell To Sea Campaign Goes on the Offensive

Blockades and protests from Ennis to Dublin, from Cork to Nottingham 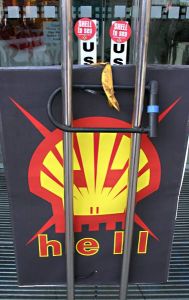 After a relatively quiet Winter, spent on speaking tours and accumulating resources to re-open the Rossport Solidarity Camp in the Spring, the Shell To Sea Campaign swang dramatically back into action with blockades and protests and a promise that this was only a taster of the direct action to come in Mayo if Shell and their cronies in Dail Eireann continue to trample on local people and force through their on-shore refinement plant.

70 people blocked both entrances  on Leeson St and Adelaide Road  for about an hour using a D-Lock and about 20 bicycles. The action, which was advertised as a rally outside the Department of the Marine and Natural Resources on the other side of Adelaide Road, was organised to draw attention to the opening of the Rossport Solidarity Camp next week.

The main door of Corrib House was locked by Shell to Sea members and then other supporters chained their bicycles in a line across the entrance. No staff were seen to leave or arrive during the blockade.

In the Rossport area in Co Mayo, continuous blockades by locals since last summer have prevented work on the Corrib Gas pipeline and refinery from taking place. Today simultaneous actions took place in Cork, Amsterdam and Sweden.

There was virtually no Garda presence at the action in Dublin, but there was a heavy media presence.

Protestors stand behind a barrier of their own bicycles

Here (below) is a link to the Rossport Solidarity Camp website

Support from a range of political groups

Has anyone being following developements in Nigeria? - crazy stuff

Shell office is looking better than ever now!

My goodwill and support. What a good show!

Good to see people standing up for what they believe, not on their knees hoping not to be rolled over.

Well done to all involved

Great stuff,good preemptive action as the construction season appraoches.
Particular plaudits to Anarchist Youth,if this is a sign of things to come form the group,its very positive.
Solidarity!

the flags look great flying at that angle over the hell placard. congrats!

I'm afraid anarchist youth thought about the indymedia trolls this time and decided to use chalk. You want to talk about the environment, let's talk about rossport and not the concrete and steel of corrib house.

Then, since you're worried about trolls, please use chalk for all your graffitti from now on, instead of the paint with which you've defaced many of Dublin's public buildings in the past. Delighted to talk about the environment. But, preferably with an adult rather than adolescents who've discovered that 'anarchism' is the latest fad thing. Try me in a few years when you've grown up and probably working as a highly-paid executive in some multi-national. And, if you think that's unlikely, go check out what all the 'anarchist youth' of the 1980s are doing now

Deadly Action- well done to all

RTE six -one news had really good coverage of the blockade. They even mentioned the camp opening. It all looked really impressive. Well done to all in Dublin Shell to Sea (dublin shell to hell?).

To all involved in the organisation of, and participation in, today's events - thanks.
I believe that, together, we will see to it that the new century and new millenium will reclaim reason in the face of last century's profit-fuelled madness.
I would like to put on record my respect for the great people who camped in solidarity with Rossport last Summer. It will be great to see you all back again soon - with more friends.
Ar scáth a chéile a mhaireanns muid.

Try us in a few years' time?

Back in the 1940s, when Noam Chomsky first began to develop his political views, I imagine some people dismissed his thinking with condescending comments like this:
" ... discovered that 'anarchism' is the latest fad thing. Try me in a few years when you've grown up ... "

I don't know where the anarchist youth of the 1980s have gone, there were not many in my home town of Cork, but I know that one anarchist youth of the 1940s went on to spend 50 years lecturing in linguistics at MIT, participating in demonstrations against the Vietnam war and subsequent American invasions, bringing up a family in a loving relationship with his wife, and writing a series of books documenting the discrepancies between what America says and what it does.

'In a few years time' .... 'John' no doubt hopes to be quaffing a fine drink on the porch of his holiday home whilst checking his stocks in the pages of the FT . All paid for by the likes of Shell .

Not all of us see that as a priority for ourselves , 'John' .
Full marks to those protestors - well done !

You see Dunaree, as long as inequality and injustice and the tyranny of those who benefit from inequality exist, there will be those who will oppose it. It's simple, it's the way we humans are. And nowadays, more people are beginning to realise that non-hierarchical structures of organisation are more effective in opposing inequality, because they encourage meaningful personal participation. Some folk just don't like other folk taking responsibility for themselves and their actions, it doesn't suit their cosy status quo.

And you know what Dunaree, as you may have guessed from my moniker, I take a longer look at history than most. I've seen forms of libertarian struggle come and go but there's more of us out there now than ever before and we're not going to go away.

And regarding Rossport, why do you think Shell have had such an easy deal from the government? Do you not think the country could benefit from the sustainable exploitation of our national resources? What about a decent health service? For even you will get old Dunaree and even with all the taxes and PRSI I'm assuming you've paid over the years, it won't guarantee you the last few years of your dotage free of poverty. Do you not feel that as another person dies on the streets, during a time when the economy is booming, that it reflects directly on you and me as we type away the hours in our warm homes? Because I've read some of your posts over the years and you seem the patriotic type.

But then maybe you think the poor will always be with us and maybe that suits you... You probably don't even give a shit that Ray Burke's getting a pension that you're contributing to.

Anyway Dunaree, why don't you try me in a few years when you've grown older; I'll still be an anarchist and you'll just be even more bitter. Though sadly I'd imagine, unrepentant.

Anyway, enough time wasted on you and your negative stupidity. Thanks to everyone who turned up at Corrib House today, be they anarchists, Shinners, Greens, Swippers, Sps, Lps, civilians, whatever.

See you all in Rossport. Shell to Sea!

Terry Sneaks Up On Trev

Trevor Joins The Line Up

The Blockade Is On

More Chalk - It's A Versatile Medium

Not Dante's Inferno - This One's The Real Deal For Rossport

Sometimes They Congregate In Small Groups

Others Are Loners By Nature

btw: There was good footage of the blockade on the 7pm TG4 news yesterday.

great pictures, especially the one of the banana skin on the door. shell will slip up!

This story is now a global Indymedia Feature. See the link below

I have also started a thread on this on www.politics.ie

This is real momentum

A big well done to the 70 people involved in this protest. Terrific stuff. This campaign has real momentum. Let us all get behind it and really drive Shell (and the Irish Government that are supporting them) to Sea! And lets see if Ireland can regain our most valuable natural resources which the government so horrendrously gave away to the multi-nationals.

Screen Shot for the history books

http://www.indymedia.ie/article/74329
Indymedia Ireland is a media collective. We are independent volunteer citizen journalists producing and distributing the authentic voices of the people. Indymedia Ireland is an open news project where anyone can post their own news, comment, videos or photos about Ireland or related matters.