James Connolly's Grandson In Fresh Call To Save 16 Moore Street 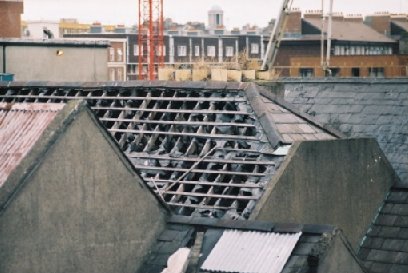 Today (Weds 10th August) James Connolly's grandson made a renewed call for the house with 1916 associations to be saved from developers. During the Easter Rising, the house at 16 Moore Street was the location where Padraig Pearse, a wounded James Connolly and other leaders of the Rising spent their last two days of freedom. They had fought their way out of a blazing GPO, ran into a house in Moore Street and tried to smash their way through the walls of the terrace and escape.

Dublin City Council has already said the demolition of a house where the leaders of the 1916 Rising surrendered is crucial for the rejuvenation of the city centre. Earlier last year, the National Graves Association, An Taisce and Dublin's Lord Mayor have all called for the house, number 16 Moore Street, to be fully preserved but pressure is mounting.

As well as the grandson of James Connolly, leading conservationists and local representatives are calling for a Millennium Mall on the site to be amended and the building saved. It is now 88 years ago since the Easter rebellion, lead by one of Irelands most renowned revolutionary Marxist scholars reached number 16 Moore Street but could go no further.

In a twist to todays call Dublin City Council has reportedly stood by their earlier position that while 1916 should be appropriately recognised, the building must go. It plans to demolish the house as part of a rejuvenation project which would allow Moore Street be connected to O'Connell Street. Now the fate of 16 Moore Street is not sealed just yet, as the Council still has not secured control of the site and further planning permission is required, but time is running out, fast.

Related Link: http://www.rcgfrfi.easynet.co.uk/ww/connolly/
http://www.indymedia.ie/article/71464
Indymedia Ireland is a media collective. We are independent volunteer citizen journalists producing and distributing the authentic voices of the people. Indymedia Ireland is an open news project where anyone can post their own news, comment, videos or photos about Ireland or related matters.