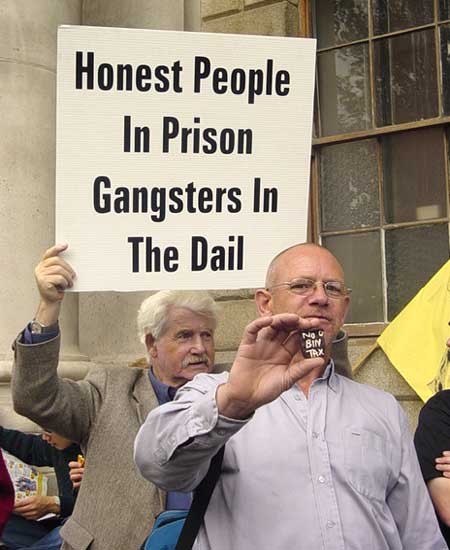 GARDAI HAVE arrested a further 12 anti-bin tax campaigners in Fingal. Three were arrested in Clonsilla and a further nine - including a husband and wife - were arrested in the Huntstown area. Two of those arrested appeared before the high court this afternoon, the rest are due to appear tomorrow. This is the latest Council manoeuvre against the Anti-Bin Tax Campaign. This follows the 5,000 strong solidarity demonstration outside Mountjoy Prison last night (Mon 22nd Sept), where Joe Higgins and Clare Daly are detained.

GARDAI HAVE arrested a further 12 anti-bin tax campaigners in Fingal. Three were arrested in Clonsilla and a further nine - including a husband and wife - were arrested in the Huntstown area. Two of those arrested appeared before the high court this afternoon, the rest are due to appear tomorrow. This is the latest Council manoeuvre against the Anti-Bin Tax Campaign. This follows the 5,000 strong solidarity demonstration outside Mountjoy Prison last night, where Joe Higgnis and Clare Daly are detained.

Six of those arrested are members of the Socialist Party. Some of those arrested today appeared on the Joe Duffy show on RTE Radio 1. Most of those interviewed said that they were willing to go to prison to defend their democratic rights. Among those arrested were a husband and wife who have three children. The husband, Stephen, has apologised and agreed to respect the injunction in order to look after their children. The government appears to think that by using strongarm tactics - similar those used against the workers of Dublin in 1913 - that the campaign will be cowed. This is not the case, as Cllr Ruth Coppinger said last night: "They will not be-head the campaign."

Last night, a massive protest of about 5000 people took place outside Mountjoy Prison. They were demanding the immediate release of Clare Daly and Joe Higgins and the ablolition of the Bin Tax. Solidarity speakers from England and Scotland addressed the rally.

Speakers at the event included Mr Mick O'Reilly of the ATGWU, who said the jailing of Mr Higgins and Ms Daly offered a "magnificent opportunity" for campaigners to appeal to the many who were outraged by the sentences, irrespective of their view of the bin charge.

Another speaker, Mr Denis Keane of the Civil and Public Service Union, suggested to cheers that if the trade union movement got behind the campaign, "we'll close down this city".

A member of the Scottish Parliament, Ms Rosie Kane, said Higgins had the political establishment in Ireland "crapping themselves".

Earlier yesterday Mr Higgins's 85-year-old mother called for her son's release after travelling more than 220 miles from Lispole on the Dingle Peninsula in Co Kerry to visit him in Mountjoy.Mrs Ellen Higgins said he and Ms Daly should be released next Thursday "at the very latest," after a week in prison. A month was "too harsh, too harsh," she added. "He is not a criminal. They are not criminals." Mrs Higgins, who had never been in a prison before, said her son was in good form yesterday afternoon and seemed rested. She described him as "the straightest, most honest person you could meet".

He had been seen a lot of poverty in the city areas where he had worked as a teacher, and that had reinforced his commitment to the underprivileged, she said.

SIPTU said yesterday it would seek a joint trade union initiative to campaign for an end to refuse collection charges.

Protestors outside the High Court today

i think it was an SP member

So what's the story?

What happened the people who were charged and didn't recant? Surely that's the most important thing at this moment.

They have been released and will appear in court tomorrow morning.

Madam, - Rather than simply accepting Mr Justice O'Neill's judgment in the case of Joe Higgins TD and Cllr Clare Daly, I would suggest that it is the fundamental obligation of every citizen to question unjust laws.

Your Editorial of September 20th fails do this and, in a manner more in keeping with the English Daily Mail, questions "unlawful campaigns against policies decided democratically at local level".

No one person has ever been elected specifically on a pro-bin charge ticket and I doubt if anyone ever will. Galway City Council is currently attempting to pass by-laws concerning the public right of assembly that are non-constitutional and against the UN Declaration of Human Rights. Would you accept these laws if passed by a handful of local councillors?

You fail sufficiently to contrast the severity of the sentence and the willingness of the police to pursue this matter with other flagrant breaches of the law of contempt, the refusal to pay tax elsewhere in Ireland and known incidents of dumping waste.

You cite waiver schemes when, in a letter on the same page, Jim O'Sullivan points out that no such scheme exists in Sligo. Do you believe that privatised companies will continue to operate any existing schemes once they own the right to operate local services?

You cite the principle that the polluter should pay. Households currently account for 1.5 per cent of the waste produced in Ireland and are often helpless to prevent the mass of waste packaging dumped on them as consumers. Polluters should indeed be made to pay, but you failed to point out just who they are.

You claim that bin charges encourage recycling when in Waterford it has been shown merely to increase the burning of household waste - hardly an example of environmental progress.

If, as you say, this is a matter for general political debate, I hope the level of debate is better informed and less reactionary than your Editorial. - Yours, etc.,

Madam, - I spoke recently with a Dutch friend about the bin tax controversy. She pays 2000 council tax plus charges for her bins, water and sewerage, plus higher income tax.

She could not believe we were complaining.

This set me thinking. Joe Higgins says that "the rich" should pay, but I cannot think of a single industrialised nation where "the rich" pay high taxes and the ordinary working Joe (pardon the pun) pays the relatively low taxes we pay here.

In the Nordic social democracies, the model to which many of us aspire, everybody pays high taxes, but this is not what Joe Higgins is selling.

I wonder: is Joe Higgins actually a socialist, or merely a populist who will tell people what they want to hear? Supposing he was Taoiseach, and implemented heavy taxes against "the rich". What would happen? They'd probably leave, go to a less taxing climate, as happened in Britain in the 1970s, and then what? Who pays the high taxes then? Sean Citizen, that's who, and Joe Higgins is being economical with the truth in not telling people this.

His other declaration, that the State has cut taxes on businesses is correct - except that he neglects to inform people of the effects of this, in particular the fall in unemployment from 19 per cent to 5 per cent.

We are nine months from the local elections, and if Joe Higgins's party wins 13 seats in Dublin Fingal he can run the county, abolish the bin tax and triple the commercial rate. But he is not telling anyone this, because I suspect he would he horrified if his party was ever put in a position of actually having to make decisions. - Yours, etc.,

Madam, - Which is the more serious offence - obstructing a bin lorry for a few days or a tribunal for an extended period? - Yours, etc.,

Madam, - Why should Joe Higgins not be jailed? Just because he is a "socialist" does not give him the right to object in any illegal way.

He must object within the law, just like the rest of us. - Yours, etc.,

The present situation is as follows:

2 people have been jailed for a month, Joe Higgins and Clare Daly.

1 person is in the district court tomorrow at 10:30 AM, charged under the Public Order Act for his role in a blockade.

9 people are in the high court at 11:00 AM tomorrow for contempt of court. Their case was adjourned this afternoon. 2 of the 11 arrested in this batch have been let go because they purged their contempt for personal reasons.

All of the above are from the Fingal area.

As I understand it another 13 people are in the high court from the city area on Wednesday, for breaching the injunction in the City area. I will try to get more details on this last group soon.

We have to stand firm. There is a protest tomorrow at the high court starting from around 10 in the morning.

The Sp are only using this for votes , they are just as corrupt as every other party in the dail,
trust me ive heard them lie many times,
from anti-bin tax supporter in cabra,
The socialist party are only using this campaign to get votes, they
Are as corrupt as the other parties, here are some examples of lies
They have told: their posters said release the socialists,
The people locked up were not all socialists or sp members,
At the Gresham hotel meeting after the sp members release
They attempted to portray themselves as legendary heroes and made
Comparisons between themselves and the irish landleague and the fenians,
Quoting letters -saying things like it makes me so happy that my children have rolemodels to look up to,
They said that jim larkin was a great socialist - this is the sp
attempting to claim credit for Jim Larkin when he was infact a communist,
they also had pictures of James Connolly on the walls and their banners
when in real life he was also a communist,
one of their members made a statement saying that they had intentions to set up
a peoples army (which they wouldnt have the courage neither the public support to do) this was an appeal to the gullible youngpeople in the room - im one of thm but I saw through their lies, some others didnt, unfortunately and as a result joined the sp on the day.
Joe Higgins is a pathetic public speaker, he is a beaurocratic wannabe and his lie is
That he claimed he was not allowed to speak while he was in mount joy (as if he was in chains when in fact he could walk around freely getting luxury treatment as if he was a visiting guest),
Also after he said he was not allowed to speak (a referance to his imprisonment)
He said - when you get out believe me you want to speak,
(This was covering his nervousness at speaking infront of a room full of working class people - whose votes he was trying to winover , he himself is a snob.)
when prompted by the audience to speak he said: dont temp me, (as if he would have continued and as if he had some angry things or curses to say), the other sp member spoke like she was stoned, (she is obviously one of these un-intelligent easy going alcoholic morons and definitely not leadership material), she also kept forgetting her speech and forgot important times and dates ( this shows she is not enthusiastic about the campaign at all, she obviously dosent give a shit because if she did she would have known these dates and times- the audience corrected her though a few times, ( as a response to these corrections she said- yeah whatever you spenf two weeks in jail and see if you can still speak,
this covers up the fact that dosent give a shit and is using the campaign for votes)
alot more to say but no time- sorry everyone

http://www.indymedia.ie/article/61258
Indymedia Ireland is a media collective. We are independent volunteer citizen journalists producing and distributing the authentic voices of the people. Indymedia Ireland is an open news project where anyone can post their own news, comment, videos or photos about Ireland or related matters.