A Saigon moment looms in Kabul

In this article by Pepe Escobar who is reporting on the situation in Afghanistan where province after province has rapidly fallen to the Taliban, he compares the current situation to the chaotic evacuation from Saigon in Vietnam after the USA had killed at least 2 million there in a brutal war that lasted more than a decade. In the case of Afghanistan the USA and NATO have achieved zero and spent over 2 trillion dollars but in the process have further destroyed the country and killed untold hundreds of thousands of Afghans.

Now as told by Escobar the Taliban are avenging America's invasion way back in 2001 and as Kandahar the second city of Afghanistan has already fallen, the only obstacle that remains is Kabul itself and as one commentator suspects they may be hoping to take that on Sept 11th which would be a fitting slap in the face to the Empire. That though remains to be seen whether it will occur on that date but it will happen one way or another.

Here are a few excerpts from his article. For the full content see the original at: http://thesaker.is/a-saigon-moment-looms-in-kabul/

In a coordinated blitzkrieg, the Taliban all but captured three crucial hubs: Ghazni and Kandahar in the center, and Herat in the west. They had already captured most of the north. As it stands, the Taliban control 14 (italics mine) provincial capitals and counting.

First thing in the morning, they took Ghazni, which is situated around 140 kilometers from Kabul. The repaved highway is in good condition. Not only are the Taliban moving closer and closer to Kabul: for all practical purposes they now control the nations top artery, Highway 1 from Kabul to Kandahar via Ghazni.

That in itself is a strategic game-changer. It will allow the Taliban to encircle and besiege Kabul simultaneously from north and south, in a pincer movement.

Kandahar fell by nightfall after the Taliban managed to breach the security belt around the city, attacking from several directions.

He opted to engage in an elaborate deal, convincing the Taliban to allow the remaining military to retreat to Kandahar airport and be evacuated by helicopter. All their equipment, heavy weapons and ammunition should be transferred to the Taliban.

Afghan Special Forces represented the cream of the crop in Kandahar. Yet they were only protecting a few select locations. Now their next mission may be to protect Kabul. The final deal between the governor and the Taliban should be struck soon. Kandahar has indeed fallen.

And while most of the US & NATO troops have now left they are deploying some to ...

Reports indicate the Pentagon plans to redeploy 3,000 troops and Marines to Afghanistan and another 4,000 to the region to evacuate the US Embassy and US citizens in Kabul.

For those interested in how the Pashtuns -who are the main tribe of Afghan managed to break the British, then the Russia and now the US-Anglo empire, there is no better analysis than this article by Dmitry Orlov

The Taliban have entered the city and the Afghan President Ashraf Ghani has resigned and already fled the country. 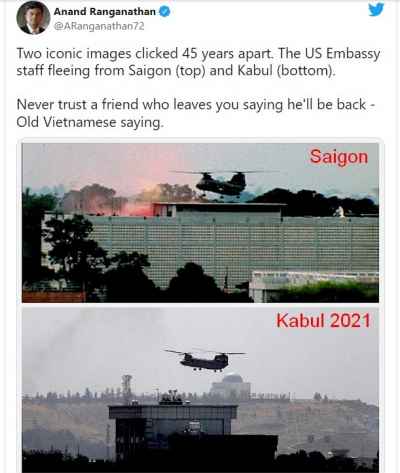 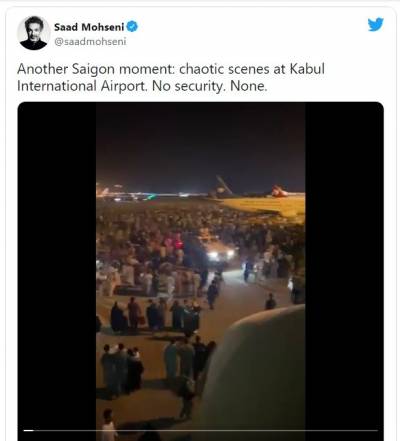 Thierry Meyssan has written an extensive analysis that puts the situation of Afghanistan in context. He writes:

In covering the fall of Kabul, the Western media are mindlessly repeating seven lies of Western propaganda. By misrepresenting the history of Afghanistan, they mask the crimes committed in that country and make it impossible to foresee the fate that Washington has written for it. And if the Taliban were not the most wicked...
https://www.voltairenet.org/article213772.html

And in this article Meyssan seems to be suggesting that the way thousands of weapons have fallen into the hands of the Taliban is that it was planned and awfully like the way the US armed ISIS.How US armed the Islamic State of Afghanistan ..leading one to consider where there is something else going on here.

Caption: Breaking: US Military Chinook helicopters evacuating the US Embassy in Kabul , Afghanistan.

The Taliban has created momentum in a brilliant way. The retreat from the provincial capitals is not complete. These forces have not yet received new assignments in Kabul. Without waiting the Taliban are pushing their advantage.Checkmate, game over, truly unbelievable, I am flabbergasted.

US is offering its citizens LOANS to flee Afghanistan

Never an opportunity missed to promote the Covid propaganda. Nevertheless it is hilarious.. From RT.com report.

As the Taliban closes in and the troops rush to avert disaster, the US is offering its citizens LOANS to flee Afghanistan

The US exit from Afghanistan is beginning to look more and more like 1975s humiliating fall of Saigon, but American citizens fleeing the country need not fret  Uncle Sam has offered them loans to buy plane tickets.

Thats right, those decapitation-phobics who dont want to fall into Taliban hands can get a repatriation loan from the US State Department. The usual terms and conditions surely apply.

The US Embassy in Kabul dangled the offer last week, when it advised all American citizens in Afghanistan to leave immediately using available commercial flight options. It provided a State Department email address for those who needed to apply for airfare financing. The loans were mentioned again when the embassy sent out a similar security alert on Thursday, offering essentially the same advice.

On both occasions, it made it clear that Americans shouldnt expect much more help: Given the security conditions and reduced staffing, the embassys ability to assist US citizens in Afghanistan is extremely limited, even within Kabul.

Among the dangers cited were crime, terrorism, civil unrest, kidnapping, armed conflict, and Covid-19. Of course theres Covid-19. Be sure to get your shots and mask up. You wouldnt want to have a fever and shortness of breath when trying to outrun militants in a Toyota Hilux pickup with a mounted machine gun...

But don't worry nothing of the sort happened and the capital has been taken peacefully.
Related Link: https://www.rt.com/op-ed/532053-taliban-afghanistan-us-citizens-loans/
Julian Assange speaks about the goal of the war in Afghanistan

http://www.indymedia.ie/article/107952
Indymedia Ireland is a media collective. We are independent volunteer citizen journalists producing and distributing the authentic voices of the people. Indymedia Ireland is an open news project where anyone can post their own news, comment, videos or photos about Ireland or related matters.