Hugo Chávez kept his promise to the people of Venezuela 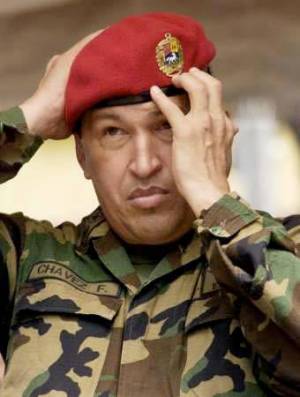 The Commandante is dead but the Revolution continues. If there is an afterlife then Chavez is in Valhalla.

He wrote, he read, and mostly he spoke. Hugo Chávez, whose death has been announced, was devoted to the word. He spoke publicly an average of 40 hours per week. As president, he didn't hold regular cabinet meetings; he'd bring the many to a weekly meeting, broadcast live on radio and television. Aló, Presidente, the programme in which policies were outlined and discussed, had no time limits, no script and no teleprompter. One session included an open discussion of healthcare in the slums of Caracas, rap, a self-critical examination of Venezuelans being accustomed to the politics of oil money and expecting the president to be a magician, a friendly exchange with a delegation from Nicaragua and a less friendly one with a foreign journalist.


External Links: The Revolution Will Not Be Televised (a.k.a. Chavez: Inside the Coup) is a 2002 documentary about the April 2002 Venezuelan coup attempt which briefly deposed Venezuelan President Hugo Chávez. A television crew from Irelands Radio Telifís Éireann happened to be recording a documentary about Chávez during the events of April 11, 2002.
Related Indy Links: US$100 million for the head of President Hugo Chavez Frias - and some other stories. | Fears Of Second Coup Against Venezuela's President Hugo Chavez | Chavez and the Grassy Knoll + Catch 22 is dead long live . . . | Chavez had advance warning of coup [Greg Palast, The Guardian] | Hugo Chavez Declared President of America | Liberal press asleep ( on Coup to Oust Chavez ) | Director's Cut, Chavez - Inside the Coup, Galway | Amnesty forced to withdraw Chavez Documentary amid threats of violence | Chavez wins referendum | Chavez calls for democracy at work | US Man of God calls for assassination of Chavez | Chavez addresses the UN | US planning invasion, says Chavez | Rumsfeld says Chavez is like Adolf Hitler | A specter is haunting the North American Empire... the specter of Chavez! | Inside the revolution - former Chavez minister speakes GALWAY | Chavez gets go ahead to join Arab League at last. | Bush Admin Funneling Millions Into Chavez Opposition Groups | Hugo Chavez : "Yesterday, the devil came to the UN, and today, it still smells of sulfur and Bush" | Hugo Chavez has won his second term as President | Honduras: Anti-Chavez free speech warriors linked to coup | Chavez Appoints a Successor as his Cancer Returns

Nicaragua is one of Venezuela's allies in Alba, the organisation constituted at Chávez's initiative to counter neoliberalism in the region, alongside Cuba, Ecuador and Bolivia. It has now acquired a life of its own having invited a number of Caribbean countries and Mexico to join, with Vietnam as an observer. It will be a most enduring legacy, a concrete embodiment of Chávez's words and historical vision. The Bolívarian revolution has been crucial to the wider philosophy shared and applied by many Latin American governments. Its aim is to overcome global problems through local and regional interventions by engaging with democracy and the state in order to transform the relation between these and the people, rather than withdrawing from the state or trying to destroy it.

Because of this shared view Brazilians, Uruguayans and Argentinians perceived Chávez as an ally, not an anomaly, and supported the inclusion of Venezuela in their Mercosur alliance. Chávez's Social Missions, providing healthcare and literacy to formerly excluded people while changing their life and political outlook, have proven the extent of such a transformative view. It could be compared to the levelling spirit of a kind of new New Deal combined with a model of social change based on popular and communal organisation.

The facts speak for themselves: the percentage of households in poverty fell from 55% in 1995 to 26.4% in 2009. When Chávez was sworn into office unemployment was 15%, in June 2009 it was 7.8%. Compare that to current unemployment figures in Europe. In that period Chávez won 56% of the vote in 1998, 60% in 2000, survived a coup d'état in 2002, got over 7m votes in 2006 and secured 54.4% of the vote last October. He was a rare thing, almost incomprehensible to those in the US and Europe who continue to see the world through the Manichean prism of the cold war: an avowed Marxist who was also an avowed democrat. To those who think the expression of the masses should have limited or no place in the serious business of politics all the talking and goings on in Chávez's meetings were anathema, proof that he was both fake and a populist. But to the people who tuned in and participated en masse, it was politics and true democracy not only for the sophisticated, the propertied or the lettered.

All this talking and direct contact meant the constant reaffirmation of a promise between Chávez and the people of Venezuela. Chávez had discovered himself not by looking within, but by looking outside into the shameful conditions of Latin Americans and their past. He discovered himself in the promise of liberation made by Bolívar. "On August 1805," wrote Chávez, Bolívar "climbed the Monte Sacro near Rome and made a solemn oath." Like Bolívar, Chávez swore to break the chains binding Latin Americans to the will of the mighty. Within his lifetime, the ties of dependency and indirect empire have loosened. From the river Plate to the mouths of the Orinoco river, Latin America is no longer somebody else's backyard. That project of liberation has involved thousands of men and women pitched into one dramatic battle after another, like the coup d'état in 2002 or the confrontation with the US-proposed Free Trade Zone of the Americas. These were won, others were lost.

The project remains incomplete. It may be eternal and thus the struggle will continue after Chávez is gone. But whatever the future may hold, the peoples of the Americas will fight to salvage the present in which they have regained a voice. In Venezuela, they put Chávez back into the presidency after the coup. This was the key event in Chávez's political life, not the military rebellion or the first electoral victory. Something changed within him at that point: his discipline became ironclad, his patience invincible and his politics clearer. For all the attention paid to the relation between Chávez and Castro, the lesser known fact is that Chávez's political education owes more to another Marxist president who was also an avowed democrat: Chile's Salvador Allende. "Like Allende, we're pacifists and democrats," he once said. "Unlike Allende, we're armed."

The lesson drawn by Chávez from the defeat of Allende in 1973 is crucial. Some, like the far right and the state-linked paramilitary of Colombia would love to see Chavismo implode, and wouldn't hesitate to sow chaos across borders. The support of the army and the masses of Venezuela will decide the fate of the Bolívarian revolution, and the solidarity of powerful and sympathetic neighbours like Brazil. Nobody wants instability now that Latin America is finally standing up for itself. In his final days Chávez emphasised the need to build communal power and promoted some of his former critics associated with the journal Comuna. The revolution will not be rolled back. Unlike his admired Bolívar, Chávez did not plough the seas.

Related Link: http://www.guardian.co.uk/commentisfree/2013/mar/05/hugo-chavez-people-venezuelan-president
http://www.indymedia.ie/article/103377
Indymedia Ireland is a media collective. We are independent volunteer citizen journalists producing and distributing the authentic voices of the people. Indymedia Ireland is an open news project where anyone can post their own news, comment, videos or photos about Ireland or related matters.