Selling off the Dublin Mountains

Our political parties are at it again. They can't seem to stop. They are rezoning land in areas where the County Manager has already strongly opposed it and as usual FF councillors are at the forefront with FG very close behind. You would think that something might change after FF has led this country to economic ruin and has saddled everyone with debt that has nothing to do with them, restarted emigration and condemned the young, old and sick to cutbacks and poverty for an indefinite period with no end in sight. It all just goes to show the huge democratic deficit in this country and the fact that these self-serving political parties and their developer friends don't give a damn about anyone, the environment or our common future. And so we feel it is important to featurize this local but important story below. 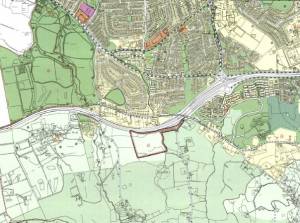 
Related Links: Irish Times - Feeding frenzy at the speculator's trough' not a hidden secret | Indo - Councillors defend vote to rezone land at centre of corruption trial | Finfacts.ie - Irish Planning Corruption Tribunal 1997-2007: Land Rezoning Reform since 1997 - ZERO Demolishing' Ghost Estates, a sign of worrying times ahead | Gleann Riada Action Group -Yet Another Housing Estate Scandal | An Taisce calls on Martin Cullen to explain his role in delivering access to Jackson Way lands | Corruption Watch at Tara - Lets do some digging of our own

Dun Laoghaire Rathdown County Councillors are going to take a final vote on December 10th, about whether to permit a change of zoning for part of the Ticknock area of the Dublin Mountains (between Kellystown Road and Ticknock Road on S side of M 50) to facilitate the development of a 'retirement village' there. A majority of our local Councillors have so far been in favour, though they have not given any reasons why.

The development appears to be of potential benefit to the developer only but not to older people themselves (who will be isolated in this facility, against best practice and current policy) or to the community as a whole (who will see another chunk of open space rezoned for private profit). It also breaches the current limits of the protected area of the Dublin / Wicklow Mountains.

Campaigners are asking local residents to contact those councillors who voted in favour of this at an earlier stage and ask them to vote against on the 10th. Do give your name and address when you make contact, so it is obvious that you are a local constituent and voter.

The proposal was put to public consultation in October. Now, in advance of the December 10th meeting, the County Manager has produced a report on the submissions, summarising and commenting on all those received. There were 67 well-argued submissions opposing the proposal, and 24 supporting it - most of these say nothing more than 'we support the development - it will be good for the area' but give no concrete reasons (wonder who wrote those?) A small number of submissions were 'neutral'.

There was one submission on behalf of the promoter of the retirement village scheme, citing local demand for such developments (not apparently researched or otherwise detailed), the fact that it will be a self-contained, secure environment (all services, shops etc. on site so residents won't need to go anywhere else! - he also says its attraction will be that services there will not be open to the general public). He also claims that a number of jobs would be created locally. But he has provided very few details of the proposed scale of the development and the facilities envisaged in addition to housing, some shops and some (presumably private) medical services.

The link to the plan on the DLR site is here and documents and maps here and Variation No. 9 Strategic Environmental Assessment Determination

Reasons against (given by those objecting):

1) The proposal is contrary to the decisions of the County Development Plan (as agreed by the Councillors) and contrary to stated local and national housing policy, which states that any new development for older people should be situated within existing communities and have access to all services ('communities for all ages' or 'sustainable communities').

2) If there is demand in the County for 'retirement villages', there are sufficient other lands available in the County, within existing residential areas and already zoned residential, which could be developed.

3) The development would have a serious impact on the visual amenity aspect of the Dublin Mountains Foothills (there are 'preserved views' which would be obstructed) and particularly on the recreational/open space aspect.

4) The Dublin Mountains are an essential amenity for the whole city (and for the many visitors who come here) - they belong to all of us, and to our children and grandchildren.

5) The site is on the South - mountain - side of the M 50, which has been and should permanently remain the boundary of the built up area.

6) Problems with the site itself include: inadequate road network locally, with potential traffic hazards  and a dangerous junction (the only access is via Ticknock Rd) ; it's a steep and exposed site, not exactly suitable weather-wise for older people; inadequately serviced in terms of water and drainage/ sewage  there are problems in Ticknock area already; any footpaths within the 'village' would have no connections with any footpaths in the surrounding area; serious noise pollution can be expected from M50 nearby.

7) Most active older people need and want to be involved in local community activities, and would want easy access to churches, library, cinema etc.which the siting of this village clearly would not offer. They/ we do not want to be segregated and hidden away with only their/ our own age group for company! [ Or do those in favour envisage a village intended only for those who are sick and frail ?]

8) Nearest public transport is a bus stop two-thirds of a kilometre away with a service running only once every hour which does not connect to Dundrum, the nearest obvious centre.

9) If this development is permitted, it would be a very dangerous precedent for other encroachments on the open space/ wild areas of the Dublin Mountains.

The County Manager has strongly opposed this development from the start, for all these good reasons and more, and he has pointed out that other planning applications for developments on this site have been turned down by An Bord Pleanala for similar reasons.

He has not been presented with any evidence by those in favour (including Councillors in favour) which would make him change his mind. So it does seem that this is 'an unconvincing scheme, designed solely to serve developer interests'.

This development does not serve the real needs of older people, and certainly not those of the wider local community in this County and beyond. Lets keep our mountains safe from further development, and prevent the construction of this isolation facility for the sake of private profit. Local voters should challenge those councillors who have voted for this so far but have failed to give any reason for doing so.

Below is a list of the voting record last time (July 2011) along with Councillors email addresses and 'business' mobile phone numbers. DAC means a member of the "Dundrum Area Committee" (ie councillors for Dundrum, Stillorgan and Sandyford / Glencullen).

Previous Vote in July on the Village:

This is an outrageous development and it is absolutely crazy to build a retirement home up the hills. It is totally unsuitable to OAPs and they would be 100% car dependent when they would be at an age where they can no longer drive. It is a very steep climb even for a young person to cover but for an OAP it is out of the question.

This is just blatant corruption and as the author suggests it seems designed and indeed will open up the entire mountain side to development. The real plan is most likely to then build exclusive homes with city views to cater for the 1% whose wealth incidentally has gone up in the recession/depression while everyone's else has done down.

I agree we ve just had a dreadful budget and now they re back rezoning. Have they learn't nothing. However, it ll be a lovely monument to FG and FF least we forget that nothing has changed. I live locally and everyone is talking about it. We re in sheer disbelief.

re zoning and such..

by destorying our enviornment

I have seen mad re zoning plans near to where i live, on wet lands,flood planes,do you think the people who bought those houses stupidy are entiteled to insurance when they flood every year?

Word in at pm to say the rezoning was defeated - in other words some of the councillors who had voted for it at a preliminary stage now voted against it. A result for people power I'd say.

how face is saved

by so it goes

It turns out that there was a break called in which a lot of huddling took place, following which it was agreed without a vote to accept the manager's advice. In other words those councillors who had made promises (for whatever reason) to the developers as to the way they would vote could avoid exposing themselves without actually going against what they had promised. An Irish solution to an Irish problem so to speak...

Excellent article, one that has had some part in the 'proposal' being defeated.

http://www.indymedia.ie/article/102820?search_text=Tara
Indymedia Ireland is a media collective. We are independent volunteer citizen journalists producing and distributing the authentic voices of the people. Indymedia Ireland is an open news project where anyone can post their own news, comment, videos or photos about Ireland or related matters.