Occupy Galway Forcibly Evicted In The Dead of Night by Gardai. 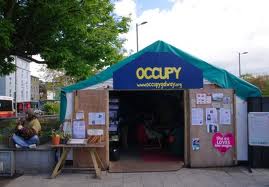 Occupy camp prior to sly 4.30am state eviction

At 4.30am this morning the Occupy Galway camp was forcibly removed by Gardai and Council workers. At 1pm we held a public assembly with around 100 people in attendance. The mood at the assembly was one of determination and optimism and it was agreed by all that the fight is only just getting started!

At 4.30am this morning the Occupy Galway camp was forcibly removed by Gardai and Council workers. At 1pm we held a public assembly with around 100 people in attendance. The mood at the assembly was one of determination and optimism and it was agreed by all that the fight is only just getting started!

We would like to thank all of you for the support that you have shown over the 7 months that we were in Eyre Square, whether you just popped in to say hello and sign our support sheet, or were a regular visitor. Many of you donated your time, many donated useful items such as sleeping bags, blankets etc and we are very grateful for your help. Knowing that we had so many supporters in Galway and around the world gave us the strength we needed to continue.

We are currently trying to retrieve all the items that were taken and any that are not personal belongings will be donated to charity as soon as possible.

Tomorrow morning Enda Kenny will be in Galway for a breakfast meeting at the Radisson Hotel where he will be pushing the 'yes' vote for the referendum. We will be assembling in Eyre Square at 7am and will be going to give him a hearty Occupy welcome. If you are an early riser, please join us.

We will also be holding a public assembly in Eyre Square at 1pm on Saturday, where we will discuss future actions.

You cannot evict an idea. Occupy Galway will only gain strength from this eviction. The Gardaí and
their string-pullers in the City Council have only engendered further support and interest in the
Occupy Movement. Today, we had our largest peoples assembly in many months on Eyre Square.
The movement has been reinvigorated.

We will be bigger, stronger and more active as a reaction to this abuse and waste of Garda
resources. Only a few weeks ago senior Gardaí stated publicly that Occupy Galway was not acting
illegally. What changed in the meantime? Already, the people of Galway are looking to the future.
We have been planning for it through the long, cold winter months.

Agents of repressive state power always come in the middle of the night, because they fear the
legitimate public backlash when they finally show their true colours.

The council and Gardaí have completely missed the point of the Occupy movement. The camp
played an important role in the movements survival through the winter, and functioned as a centre
of information and education. The camp has well served its purpose, so on to Phase 2

We have forged links with the myriad groups around the country protesting the disastrous social
effects of the bailout/NAMA process. This social support network will see us through in ways that
bankers, bureaucrats and their hired thugs cant understand.

The inequity of the bank bailouts has not gone away, so one of the main reasons for out protest still exists.
It is interesting to note that other Occupy camps around the world were raided on the same night.
Solidarity to our comrades in Frankfurt, Moscow and St Johns, Newfoundland.

We would like to take this opportunity to thank the thousands of people who expressed their
support and solidarity, in so many ways, over the past seven months. We couldnt have done it
without you and look forward to your continued support.
Watch this space......

http://www.indymedia.ie/article/101862
Indymedia Ireland is a media collective. We are independent volunteer citizen journalists producing and distributing the authentic voices of the people. Indymedia Ireland is an open news project where anyone can post their own news, comment, videos or photos about Ireland or related matters.