Pictures From The Labour Conference Protest courtesy of Occupy Galway 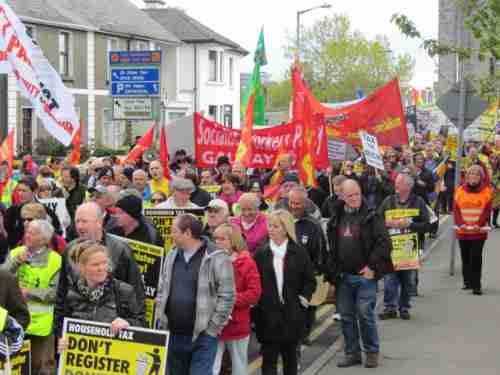 Occupy Galway took part in a protest march over the weekend along with many other groups at the Labour Party conference held in NUIG Galway. Here is some photos from the event

As you can see the event was very successful and a large number of people attended to show their disapproval of the job being done by Labour in government and of how unhappy they are with how the hierarchy in Labour have reneged on their core principles in so many ways to support a right wing agenda driven by Fine Gael. This is only to be expected from Fine Gael as this has always been their philosophy, but Labour support for this agenda is a different story altogether and many people turned up to express their dismay and anger at this betrayal by Labour on so many important issues. Sad to hear Eamonn Gilmore complaining so vocally about peaceful protesters. Somewhat hypocritical perhaps?? Here are some photos of the event, courtesy of Occupy.. Press release to follow. We hope other groups will post there photos of the event here too. Solidarity!

The use of pepper spray on peaceful protesters at the Labour Party conference in Galway was disgusting. Are people democratically protesting the various austerity measures and their disappointment at labour's betrayal to be met with the same kind of state oppression meted out on wall street to the US protesters?

Gilmore himself was once a protester. He should be ashamed of himself, and not just for this act of anti democratic state "thuggery" using vile pepper spray but also for his blatant hyopocrisy and reneging on the values he once held and which brought him to the cushy well paid position he holds today. As a past labour supporter I'm disgusted

http://www.indymedia.ie/article/101712
Indymedia Ireland is a media collective. We are independent volunteer citizen journalists producing and distributing the authentic voices of the people. Indymedia Ireland is an open news project where anyone can post their own news, comment, videos or photos about Ireland or related matters.